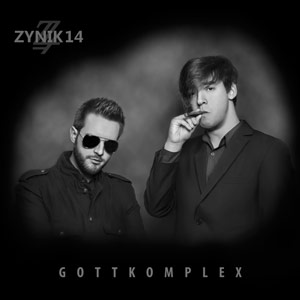 I first heard of Zynik 14 from their superb rendition of “Battle Mind” on the compilation album Adrenalin Rush – A Tribute To Leæther Strip released in 2014. The band return in 2015 with their self-released LP Gottkomplex, a straight-up, beat-heavy, old-school-ebm style that comes across in excellent fashion with powerful sounds and aggressive vocals. Stand-out tracks include “Adrenaline”, “Alphatier”, “Der Polizist” and “Feierwut” – however the entire album is a first-class production beginning to end.

If you enjoy hard-hitting EBM from Jäger 90 or Autodafeh then give a listen to Zynik 14 – their album is being offered on Bandcamp.