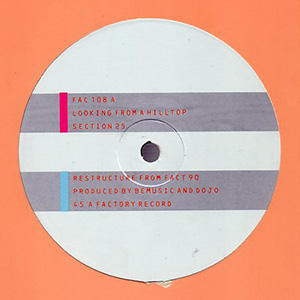 Released June 1984, “Looking From A Hilltop” by Section 25 on Factory Records, was an electro club hit in all over the world.

“Looking From A Hilltop” was originally released on the third Section 25 album From The Hip album in March 1984.

As a group, Section 25 formed in Blackpool, Lancashire in April 1978 by brothers Lawrence and Vincent Cassidy. The band name came from a provision of the Mental Health Act which allowed for compulsory detention. The group joined Factory Records and were produced by Martin Hannett and later New Order’s Bernard Sumner.

In 1983 Jenny Ross (vocals and keyboards) joined the band and Bernard Sumner produced From the Hip. Sumner worked on the “Looking From A Hilltop” 12″ single along with Donald Johnson of A Certain Ratio.

The electronic drum machine sound with its propulsion sound is unique and creates a memorable mood and cross-over style that still sounds futuristic to this day.