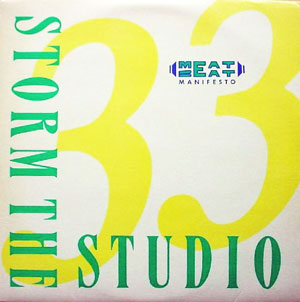 Storm The Studio by Meat Beat Manifesto released in 1989 on Wax Trax! Records was then and is still today a masterpiece of electronic sound. In it you find an unbelievable combination of funk, industrial rhythms, break beats, hip-hop, noise and rap that to this day sounds as groundbreaking as when it debuted.

Four tracks “God O.D.,” “Re-Animator,” “Strap Down,” and  “I Got The Fear” each go on to become revised much like a DJ would reconstruct and mix tracks to point where they no longer resemble the original.

Original members of Meat Beat Manifesto, Jack Dangers and Jonny Stephens pushed the musical experimentation to limit with these tracks. The album plays long and loud and provides a glimpse into the avant-garde and psychedelic live performances that featured dancers, videos and live DJs choreographed by Marcus Adams during the European an US touring of 1989.

Have a listen to the industrial classic of 1989 Storm The Studio and watch a video of Meat Beat Manifesto playing live in Nighttown, Rotterdam, The Netherlands 1989 produced for VPRO TV.