Album Review: Myrah – Until the End of Time 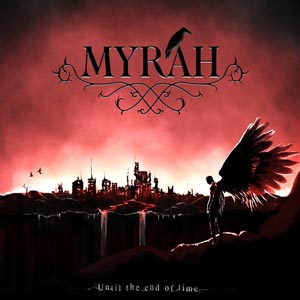 Swedish gothic metal band Myrah return with their 3rd album – Until the End of Time that follows 2010’s Six Feet Down and 2012’s My Deliverance.

The quintet of Patrik Essman (vocals and guitar), Micael Svan (lead guitar),  Josefin Berg (synths), Ian Barstowe (bass), and Joakim Granvold (drums) create an album that offers variety with atmospheric and melodic songs while at the same delivering dark gothic metal tracks that are reminiscent of the 69 Eyes and the Sisters of Mercy.

Stand-out tracks on the new album include the nice balance of lyrics and guitars in the openers “Taken” and “My Angel” as well as the ethereal and dark compositions of “She Rides The Night” and “A Shadow Screams My Name.”