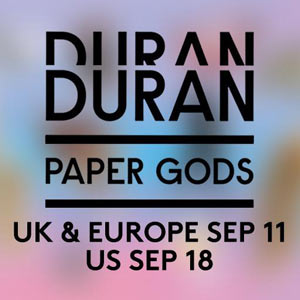 Duran Duran will have a new album on Warner Bros. Records this September. The album will be titled Paper Gods. This will be the group’s 14th album and is produced by Nile Rodgers, Mark Ronson and Mr. Hudson, and also features guests Kiesza and former Red Hot Chili Peppers guitarist John Frusciante.

Paper Gods rejoins Rodgers and Duran Duran. He co-produced the band’s Notorious album (featuring the title track, which reached No. 2 on the Billboard Hot 100), “The Wild Boys” single (another No. 2 hit) and remixed the No. 1 hit “The Reflex.” He also co-produced tracks on Astronaut. With reference to Ronson, he co-produced Duran Duran’s last studio album, 2010′s All You Need Is Now.

Prior to the album release Duran Duran will put out a single “Pressure Off,” which features Janelle Monae.

To support the new album the group has announce new tour dates including the Hollywood Bowl and Red Rocks Amphitheatre.