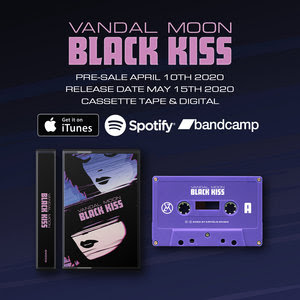 The new 10-track album will be released May 15th, 2020 by the duo based in Santa Cruz, California comprised of Blake Voss (vocals, guitars, synthesizers, principal songwriter) and Jeremy Einsiedler (drum machines and synthesizers).

About the new album, Black Voss says, “This record is more purely electronic than anything we’ve done in the past. Ninety percent of these songs were written on synthesizers, which is different for us. I like to think of it as some sort of deranged Depeche Mode record. A lot of current music that touches on the 80s has a real intentionality to it that sounds like the recycling of memories and emotions. But I feel like we’ve done something really unique and powerful that sounds closer to the world we live in now”.

“Hurt” is available now as a digital download. The album can be pre-ordered and is being offered on cassette tape as well as digital format.