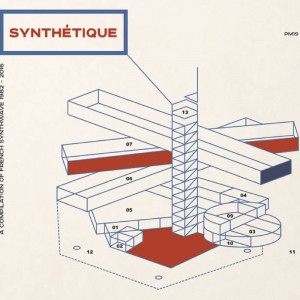 Almost a year in the making, with tracks having been mislaid or buried underneath piles of original demos, then reconstructed and remastered! This compilation aims to highlight the core elements of French Synth-Pop from its earliest incarnation to newer acts influenced by the earlier protagonists distinctive sounds and retro imagery. There will be many a familiar name here, and perhaps a few unknowns. It is not an exhaustive list of the acts associated with this particular ‘scene’, but a tribute to the idiosyncrasy and diversity of French analogue music.

Many of the tracks are completely unreleased or are early demos. For the aficionado we hope this fulfils a rediscovery of old classics or to the late-comer a decent collection of tracks that serve as an introduction to the uniqueness of French Synth music and the burgeoning new scene.

Conceived and curated by Jason B Bernard. The album comes in a luxurious digipak and is limited to 500 copies. A big thank you to all the acts involved!

Order via Bandcamp or at the Peripheral Minimal store.