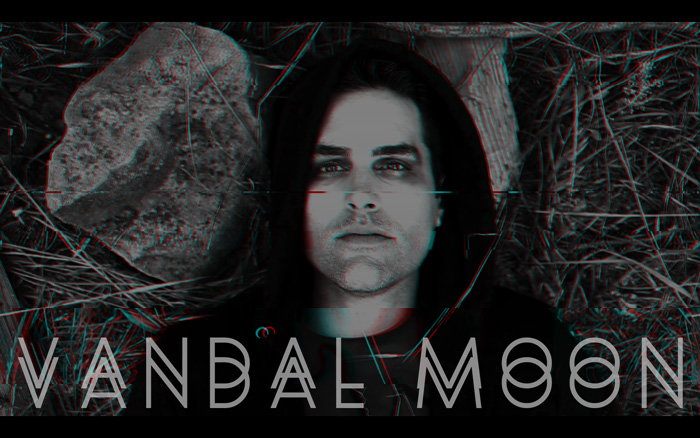 An interview with Vandal Moon reveals the drive behind the blend of synthwave and 80s alternative sound on the new album Teenage Daydream Conspiracy.

Inspired by the darker acts of the post-punk and darkwave scene of the early 80s, Vandal Moon aka Blake Voss has released his fourth album via Werkstatt Recordings. Teenage Daydream Conspiracy is the follow-up to the The LSD EP that was chosen by NeonVice.com as one the “top albums of 2014”. Voss is the main singer, songwriter and instrumentalist and taps into The Cure, John Carpenter, The Chameleons, and David Bowie to create the Vandal Moon sound established in Santa Cruz, California in 2012.

On Teenage Daydream Conspiracy Voss weaves a hauntingly familiar landscape of music that pulls you into each track. The album is a delight, delivering an experience that rouses the senses for a trip back in time with tracks that channel heavy emotion fusing an 80s synth-style with a blend of dark neo-psychedelia and dream pop. Several tracks from the album have already been featured on Andrew Daze’s Dazed and Confused, WFKU’s Black Door – 2 Years of Synthicide, and Die Seele’s Transmission Live. 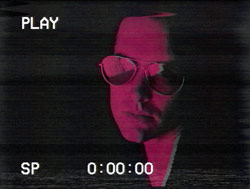 Voss takes us through the album, its sound and what is next for Vandal Moon.

Great work on your new album! I’ve been listing to it over and over and really enjoy its sound. I think “Blame It On The Weekend,” “Heart Attack,” and “Digitalmerica” are my favorite tracks. I sense a lot of work has gone into this album. Tell me a bit about Teenage Daydream Conspiracy.

In the fall of 2014, my father took his own life. For anyone out there who has lost a loved one to suicide, you know how completely maddening and unbearable it is. It’s impossible to understand and you have to be okay with most of your questions being left unanswered. For a period of time, it clouds your thoughts entirely. If you’re reading this and going through something similar, I promise you that it will be okay. It takes time. A long time. But things will get better. This is not a sad album, but it was written from within a headspace of healing and acceptance. In that regard it displays joy, awe, sadness, and elation.. all aspects of moving forward and embracing life. 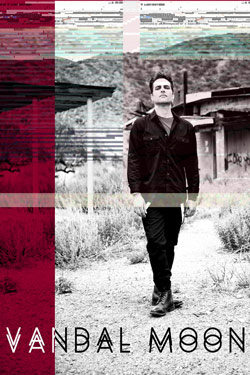 There are several collaborations on this album, notably on “Digitalmerica” with Logan Sky. How did that come about?

For some time I’d admired Logan’s work from afar. Especially the records he’d done with Steven Jones. There aren’t many people out there that have a real understanding of New Romanticism, but Logan absolutely does. I found myself in such admiration of his work that I had to at least ask if he’d be interested in working with me. I considered it a long shot as he’d played with the likes Steve Strange and Boy George. I sent him maybe four of my twenty demos for consideration, and he felt he could contribute the most to ‘Digitalmerica’. He also helped me to gain clarity on a direction the song could go. He plays analog synthesizer on the track, and really gave the song the dynamic it needed.  I am extremely grateful.

It is evident from your sound that the music of The Cure has an important role in your creations. I also sense a connection with late 70s new wave as well as psychedelic influences. What other artists are you drawing inspirations from?

It’s true. I love The Cure. Don’t we all? People sometimes tell me I sound something like The Chameleons, or even David Bowie. Which is quite flattering, but I have a hard time hearing it myself. I like to think I sound somewhere between Fad Gadget and The Grave Babies. I love the sounds of drum machines, bass guitars and synthesizers together. But in reality I’m most inspired by artists that live their lives as artists and whose works are greater than the sum of their parts. People like this represent an independent artistic path that requires a level of commitment bordering on asceticism. These are the type of people that inspire me most. People of independence with a spirit of rebellion; fully committed to their vision of the truth.

In listening to your recent podcast with Neon Vice I was struck by your discussion of post-punk music, synths, and the DIY ethos in the development of synthwave. I am curious on how you envision the future of this genre?

Synthwave is something of an anomaly. It’s spawned from a very specific, somewhat narrow vision of the 1980’s. There are numerous artists, including myself, who are inspired by folk movements of the past, like punk or goth. But synthwave is a movement that began from the top down. It wasn’t a movement that was grassroots oriented and then co-opted, like most. It was a corporate vision of commercialization that has, only now, with the support an enthusiastic group of electronic musicians, been fleshed out to it’s full potential. To oversimplify it, you have a group of Millennials and Gen Xers who are turning a very mainstream, commercialized aesthetic into a vital, living, underground movement. They’ve flipped the hierarchy on it’s head, and I’m fascinated by that idea. The synthwave kids have condensed the aesthetic down to it’s most vital components. Can it go somewhere new? Who’s to say they want it to? For some, to take synthwave outside the realm of reminiscence is to eliminate the magic completely.

How do you feel about the resurgence in underground alternative music driven by the post-punk revival of last few years?

I love it. There are a million great bands out there. I’m inspired by them daily. There’s more people on the planet than ever before, with a greater ability to communicate than ever before. Not to mention every 15 year old with an internet connection has access to endless synthesisers and effects plugins. There’s more great music created daily than any shitty Billboard music chart would even dare to track. The human artistic spirit is alive and well.

What is next for Vandal Moon?

I’m planning on releasing an EP of maybe 4 or 5 songs.  I’ve got skeletal versions written.  It’s just a matter of conveying them in an appropriate stylistic manner. These songs will be darker than most of ‘Teenage Daydream Conspiracy’. I’ve already got the album art finished. I’m talking with a couple of potential collaborators, and we’ll see where it goes from there. Count on coldwave style drum machines, distorted baselines, and some fucked up vocal effects.