The Beauty and Creativity of 80s Postpunk Culture

Author Andi Harriman celebrates the one-year anniversary since the release of Some Wear Leather, Some Wear Lace: The Worldwide Compendium of Postpunk and Goth in the 1980’s.

In early 2012, The Postpunk Project was simply an idea—Andi Harriman and Marloes Bontje had a dream to document and reveal the historic and creative aspect of the influential 1980s alternative scene that included, goth, new romantics, the bats, and postpunk. Research and writing began, yet the venture of publishing a book required capital, so a budget of $8000 was raised via Kickstarter. Successful in their campaign, Some Wear Leather, Some Wear Lace: The Worldwide Compendium of Postpunk and Goth in the 1980’s (Intellect Ltd / University of Chicago Press,  2014) was published.

The resulting book documents the era and showcases the imagination of 1980s postpunk and goth subcultures. A wonderful piece, the book is a visual work-of-art, with many rare images of the period helping recreate the scene of a time when individuals were inspired by bands including The Sister of Mercy, The Mission, Clan of Xymox, Xmal Deutschland, Christian Death, and Bauhaus. Not only is the book filled with engaging photos, it also presents recollections by those that lived this experience and share their insight about the music and fashion of the 80s goth scene. The book is highly recommend for those looking to relive this age or learn about this important cultural moment in the history of the sub-genre. 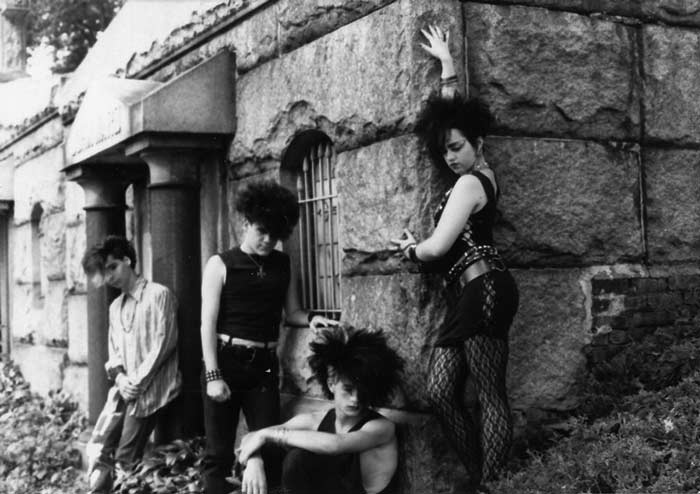 Andi Harriman, in an email interview, shares her thoughts on the experience of creating Some Wear Leather, Some Wear Lace: The Worldwide Compendium of Postpunk and Goth in the 1980’s. Harriman is a 1980s music anthropologist, writer and researcher. She is a contributing editor to Post-punk.com, a radio host for Black Door on WFKU, and since January 2014, has been hosting Synthicide, a monthly event  where she DJs synth-driven music, industrial, EBM, and oldschool techno. Harriman currently holds a BFA in Material Studies and Creative Writing from Virginia Commonwealth University and an MFA in Jewelry + Objects from Savannah College of Art and Design. Originally from the Appalachian Mountains in Southwest Virginia, she now resides in Brooklyn, New York.

Congratulations! It has been one year since your book was published. Looking back, how would you describe the experience of reaching this point as you continue promoting your debut book? Has it been easier or more difficult than you envisioned?

Thank you!  My experience promoting the book has been a lot of fun… I love meeting new people and sharing with others my passion for 80s goth.  It’s been a challenge at times – planning a release party in Berlin when neither of us (my book partner lives in the Netherlands, I am in NYC) were there to work out the details in person.  It ended well and it’s been a lot of work… I just wish there were more opportunities to throw events in the states and other cities around the world!

Do you find that the book has helped dispel misconceptions about the history of goth fashion and music, or is the subject of postpunk culture still not fully understood? Have you met the goals you set out to achieve?

My goal in researching the subject was to get a more identifiable timeline in postpunk’s history.  By conducting all the interviews I did, I think I gathered a nice oral history of the scene around the world (and in most cases were very similar even though media did not travel as it does nowadays).  Most of all, I wanted to give back to the music that meant so much to me and I think I did that as honestly as I could.  Another goal was to find like-minded people who loved music as much as I do – that definitely happened!  I’ve formulated some of my most important relationships through the book one way or another.

What has been the toughest criticism given to you about this project? Has there been disagreement by the public about the material in the book or of your account on the subject?

Not much in terms of material in the book has been criticized.  I suppose my ending remarks in the book about the future of the scene has been questioned a bit and I’ve listened to those criticisms and am happy to consider those in the re-formulation of my opinion.  Most of my friends are older goths so I suppose I do share their sentiments and their nostalgia for a different time and place (but isn’t that what goth is?).

I feel that your book has does an excellent job of chronicling the goth subculture by illustrating the beauty and excitement of the era. What other compliments have been shared with you?

Thank you!  That was exactly what the book was aiming to do.  I believe some of the most memorable compliments have been from the original goths that participated in the book.  If they were happy with the book’s result, that was more than enough validation for me.  I also love when people post pictures of the book to Instagram or Tumblr!

What does the future hold for the Postpunk Project? Are there other books planned?

There are no other plans for the Postpunk Project in general… we worked about 4 years on the book now and I can say that it has run its course. Personally, I have a couple of projects (all involving goth and/or the underground scene) that I am trying to bring into fruition in the next year.  Otherwise, I will continue to lecture on the subject and also more freelance writing on goth, music and all related subjects.

Some Wear Leather, Some Wear Lace: The Worldwide Compendium of Postpunk and Goth in the 1980’s is available at: