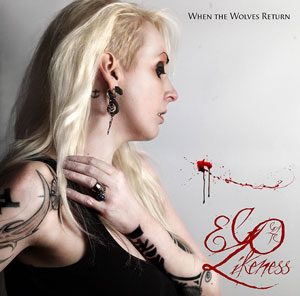 Ego Likeness, the long running musical project of artist Steven Archer and writer Donna Lynch, are set to release their new album When The Wolves Return on Metropolis Records. This marks the fifth album by the band since creating a 4-track demo called Songs From a Dead City that was self-released in 1999.

Since their last studio album Breedless was released in 2010, the duo have faced a series of personal battles, sickness and personal demons. The couple found themselves in dark places. In the aftermath, the struggles, tribulations, and eventual triumph have worked their way into When The Wolves Return. Lynch explains, “You will hear all of this on it. Not in specific words, but it’s all there, in metaphor. It is the hardest thing I’ve had to write yet, lyrically.”

The album is full of raw emotion that makes itself known as it unfolds. With each track we hear a story that describes distress and we can feel the anguish, yet the music and vocals come across with power so that the album is honest and masterful. Lynch’s singing is hauntingly beautiful and soul-penetrating as is evident on the opening track “Leave A Light On, Thomas.” The album quickly moves into an uptempo darkwave style with “Darkness” and “En Rouge.” A harder and heavier rock sound is found on “New Legion” while a perfect mix of vocals, guitars and drums are displayed on “Oracle” and “Mercy.”

At the half-way point of the album it is very clear that Ego Likeness have produced an excellent listening experience. Another great song is “Crossed,”— this is a catchy track that I want to listen to over and over again. Intense synths are distinct and polished on the previously released “Treacherous Thing.” The album closes out with two fine tracks, “Someday” and the title track “When The Wolves Return.” The result on When The Wolves Return is an intense well-rounded performance that has a lot of promise. This is an album with engaging songs alongside profound lyrics than can be enjoyed anywhere.