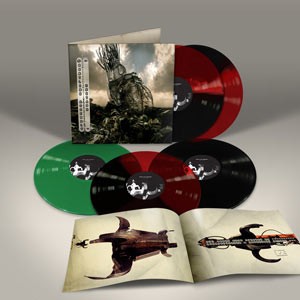 A special reissue set of Front Line Assembly’s Epitaph is now available for pre-order. Epitaph is Front Line Assembly’s 2001 release – the 10-track melodic-industrial album that saw praise from the likes of Outburn, Metal Hammer, Rock Sound, Side-Line, All Music, and others. The album’s success landed FLA with the song  track “Existence” in the film Resident Evil, and the album generated a successful single, “Everything Must Perish.”

Artoffact Records, the in-house label of Storming the Base, will release a fully authorized vinyl version of Epitaph. The 2LP edition will come in a gatefold sleeve and also include a vinyl-sized booklet showcasing the wonderful artwork of Dave McKean.

Also included will be the bonus track Providence from the “Everything Must Perish” single, which features Jenifer McLaren (Delerium) on vocals.

To learn more and pre-order visit Storming the Base.