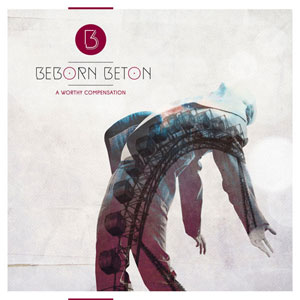 It has taken Beborn Beton a long time to return with a new album, however the drawn out wait is well worth it after listening to the work that has been put into creating A Worthy Compensation. Beborn Beton’s signature sounds of melodic synthpop with a soul and edgy ballads that groove are intact.

As the band has said, “So here we are, finally, presenting you with the best album we will probably ever make.” If the band is boastful about its efforts, then the resulting product is equally praiseworthy. The album reminds us of the high level of quality Beborn Beton have always put into their music.

The album starts off with the recently released single “Daisy Cutter” — this track makes it known that the band is emphasizing its style with a steady tune that spotlights hope and desire — when we hear “I am searching for the man that I thought I could be…” it suggests the self reassurance of someone in need.

With “I Believe,” you can easily imagine the sound of water droplets that gently make way for an elegant song with pleasing vocals. An edgy percussive sound begins to appear on the next track “24/7 Mystery,” from its driving rhythmic beat and lyrics that seeks out the woman who is “a mystery I am about to unravel.” The classic Beborn Beton sound is present on “Anorexic World” and “Terribly Wrong,” with their catchy melodies and vocals.

A Logan’s Run sample, “Last day. Capricorn 15’s. Year of the city – 2274. Carousel begins,” is heard at the start of the title track and I get the sensation this will be good — yes! This track is both a great listening experience and a mesmerizing example of the skillful song-writing talent of Beborn Beton.

So do we have best album ever made by Beborn Beton?

In a sense, I believe so. The album creates a feeling of satisfaction in finding out that the band has not changed its style after all these years — yet it is possible that time has helped it reach a new level of sophistication to give us this exceptional album.

A Worthy Compensation is an album deserving of multiple plays — it has quality and you will not want to turn it off, each track will only get more desirable with each listen as I found with “She Cried,” “Terribly Wrong,” and the German vocal song “Was Immer.”

It is a good thing that Beborn Beton felt they wanted to return to their creative flow just when they thought they had nothing more to say.

A Worthy Compensation will be released on September 4th, 2015.